Mostert to use spare chassis at AGP

Mostert to use spare chassis at AGP Chaz Mostert was an innocent party in the multi-car crash. pic: Peter Bury

Chaz Mostert will drive Ford Performance Racing’s spare chassis at Albert Park following his involvement in a multi-car accident at the Clipsal 500.

The 21-year-old was an innocent party in the restart crash that saw Jason Bright’s Holden flip wildly onto the barriers in the Senna Chicane.

Mostert, who was one of many highly critical of the restart rules following the incident, will now step into the Falcon that was driven last year by David Reynolds.

Reynolds assumed control of the 2013 Bathurst winning chassis when Mark Winterbottom moved to a new car for this year.

“We could have fixed it pretty quickly if we’d had to, it’s not that bad,” he said.

“But we had a complete chassis here ready to go so we have elected to use that. 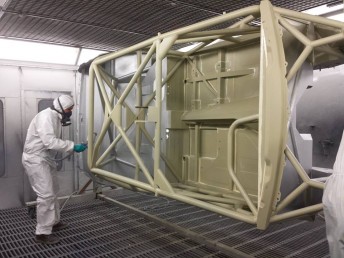 “This way it’s a bit easier on the boys in the fab shop that they’re not rushing anything.”

Mostert is expected to return to his own, ex-Will Davison, chassis in time for the second points paying round at Symmons Plains later this month.

Work continues at BJR on preparing a new chassis, which required a full day in the team’s fabrication department on Monday before the painting and fit-out processes could begin.

Pye’s Falcon meanwhile arrived back at DJR yesterday after having a front-rail repaired at Pace Innovations.

The team expects to still be putting the finishing touches on its rebuild after the car arrives at Albert Park. Will Davison’s Erebus Mercedes will also be back on track in Melbourne following its accident at Turn 8 early in Sunday’s race.

Although the car shed its left-front wheel and passenger door in the crash, Erebus general manager Ross Stone said the damage looked worse than it was.

“There was a little bit of work to do on the rear of the chassis, but it came out of it pretty well,” he told Speedcafe.com.

“It’s going back together now ahead of the truck leaving on Monday morning. It’s a tight turnaround.”

Davison’s collision with the concrete occurred after a touch from James Moffat that earned the Nissan steerer a drive-through penalty.