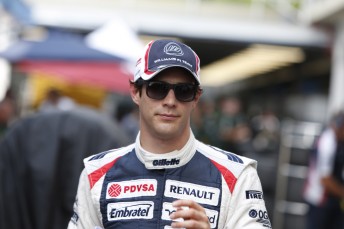 Bruno Senna has all but slammed the door on his Formula 1 career, stating that only a deal from a competitive team would tempt him into a return.

The nephew of three-times world champion Ayrton Senna told Speedcafe.com that he does not intend to revive his F1 career that saw him race 46 Grands Prix for Hispania (HRT), Renault and Williams.

Senna left F1 at the end of 2012 to compete in the World Endurance Championship for the works Aston Martin squad, after being replaced at Williams by Finn Valtteri Bottas.

Having scored 33 points, including a best finish of sixth, the 30-year-old revealed that his energy has moved on from any hope of rebirthing his grand prix career.

“I’m definitely not focussed on coming back to Formula 1,” Senna told Speedcafe.com.

“I learned that what I want to do in motor racing is win races and be competitive.

“If you don’t get a proper chance in F1 then you are just part of the grid making up numbers and I’m not particularly interested in that.

“I will do F1 again but only if there is a proper chance. I’m definitely looking at GT racing and other series and hopefully a decision can be made soon.”

Senna is yet to announce his full plans for the 2014 season although the Brazilian has been heavily linked to a drive in the all-new electric FIA Formula E Championship which launches in September.

Senna will continue his association with GT racing and Aston Martin this year, albeit in a reduced capacity, competing in the prestigious Le Mans 24 Hours event only and not the full World Endurance Championship as he did last season.

Senna is currently in Australia where he will lead a tribute to mark the 20th anniversary of his uncle Ayrton Senna’s death at this weekend’s Top Gear Festival at Sydney Motorsport Park.