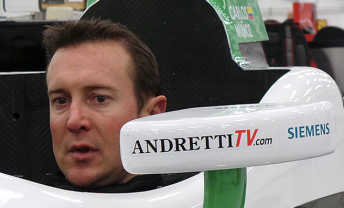 Former NASCAR Series champion Kurt Busch is confirmed to drive for Andretti Autosports in the Indianapolis 500.

Busch will become the fourth driver in history to do double duty on May 25 by also competing in the Coca-Cola 600 NASCAR event at Charlotte on the same day.

The 35-year-old, who joined the Stewart-Haas NASCAR team this year, said the opportunity to drive in the great open-wheel race is a dream come true.

“My dad, a Mac Tools distributor, and I would go to car shows and see Indy cars and he’d say, ‘this is about as close as you’ll ever get to one of these things’ because it was so far removed from what we could dream as a small blue-collar family from Las Vegas,” Busch, the 2004 NASCAR champ, said.

“It’s just the different opportunities that have come up in motorsports (that have led me) to this biggest moment outside of stock cars.

“To feel it, to experience it, I’m going to actually revert back to that to try to block out some of the emotional excitement of what it means to be part of the 500.

“To drive in it this year, nothing is going to compare. Nothing can prepare or get me ready when they drop that green flag and 33 of us rush into Turn 1.”

Busch first explored the chance of driving in the Indy 500 last May when he tested for Andretti Autosport which was his second experience in an Indy car.

“That was a whole kid-in-a-candy-store moment of experiencing an open-wheel car at 220mph.”

Busch will join Andretti incumbents Marco Andretti, James Hinchcliffe, Ryan Hunter-Reay and Carlos Munzo with a testing plan ahead of the Indy 500 being formulised.

“We have a full-blown test program to be the best-prepared we can for the Month of May. I will be a rookie, but I bring a lot of oval experience in and we’ll see how we can blend that in.”

Robby Gordon last did double duty in 2004 when he took a private jet from Indianapolis, after the rain-marred race that year, to Charlotte straight after the 500 was red-flagged for the first time with Jaques Lazier finishing the race for Gordon.

Busch’s news follows confirmation last month that Jacques Villeneueve will return to the Indy 500 for the first time since winning the event in 1995. The 1997 F1 world champion will drive a one-off third entry for Schmidt Peterson Mototrsports.