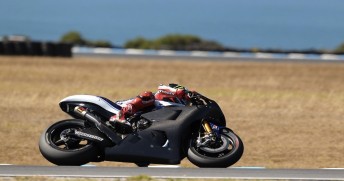 As he did on the opening two days, Lorenzo had plucked the fastest lap around the circuit which was laid with fresh bitumen last year.

The new surface led to extraordinary tyre wear problems which prompted Bridgestone to order the current round of testing in order to gather data on which is the best compound to use for October’s round of the MotoGP World Championship.

Honda’s Dani Pedrosa was second fastest in 1:29.458s while Valentino Rossi was third fastest on the second factory Yamaha in 1:29.554s.

Cal Crutchlow was fourth after turning a best of 1:29.606, almost half a second head of fellow Ducati rider Andrea Dovizioso.

The MotoGP season kicks off at Qatar on March 23.

See below for day 3