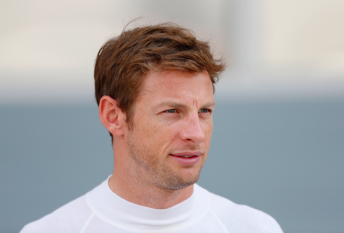 Formula 1 star Jenson Button is the latest to weigh in on V8 Supercars’ controversial new restart rules following the Clipsal 500.

A multi-car accident during Sunday’s 250km Race 3 triggered a landslide of calls for the new system, which sees the field travelling at between 50 and 60km/h prior to a dedicated ‘Acceleration Zone’, to be scrapped.

After watching a replay of the race, Button wrote on Twitter that “racing in V8 Supercars is some of the best but the restart rules need a little bit of work! unnecessary danger & unfair penalties.”

Think the racing in @v8supercars is some of the best but the restart rules need a little bit of work! unnecessary danger & unfair penalties.

I think the lead car at a restart in @v8supercars should be able to control the speed from the entry to the last corner… — Jenson Button (@JensonButton) March 4, 2014

You don’t need to anymore action to a category that is packed full of it. — Jenson Button (@JensonButton) March 4, 2014

The 2009 F1 world champion’s comments drew responses from a number of V8 Supercars drivers, while the category’s general manager of motorsport, Damien White, conceded that the system “needs work”.

Button is the only current Formula 1 driver to have sampled a V8 Supercar, completing Vodafone promotions with Triple Eight machinery at Albert Park in 2010 and Bathurst in 2011.

The team had also held discussions with the Briton about competing in the 2011 Sydney 500 as a wildcard, although such an entry never materialised.

With close to 1.7 million Twitter followers, Button’s comments on the Adelaide V8 Supercars action is a boost for the category’s overseas exposure ahead of its support role to the Australian Formula 1 Grand Prix in less than a fortnight.