Lorenzo on top on day 2 of Phillip Island tyre test

Lorenzo on top on day 2 of Phillip Island tyre test 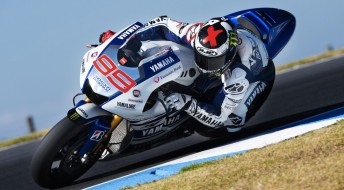 Lorenzo clocked a best lap of 1:29.133s as temperatures climbed with Dani Pedrosa finishing with the second best time while Andrea Dovizioso was third.

The long runs at Phillip Island have fully tested Lorenzo who is still recovering from post-season follow-up operations following crashes where he twice broke his collarbone last year.

Yamaha, Honda and Ducati factory teams took part in the tests with Bridgestone issuing a number of different compounds in order to develop rubber to cope with a race distance on the freshly resurfaced track.

Also in attendance at the test were Moto2 outfits Marc VDS Racing and Mapfre Aspar, which are on Dunlop rubber for the private tests.

Valentino Rossi laid down the fourth best time, completing 75 laps for the day while Ducati’s Cal Crutchlow was fifth.

Esteve Rabat was the leading Moto2 rider as he finished just over 3s slower than Lorenzo for Marc VDS while Mika Kallio was a further .5s slower on the second Marc VDS machine.

Both Nicolas Terol and Jordi Torres were pleased with the progress on the Dunlop rubber for the Mapfre team.

The tyre tests conclude at the island circuit tomorrow.