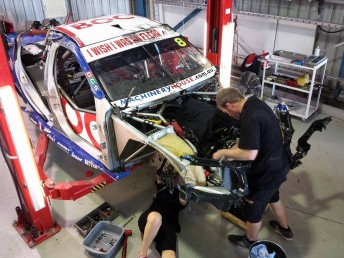 The BJR crew at work taking parts from the damaged chassis

Brad Jones Racing has confirmed that it is building a new car for Jason Bright to take to the Australian Grand Prix following his horrifying accident at the Clipsal 500.

Although team owner Brad Jones said Sunday evening that the fate of Bright’s car would not be known until it returned to the workshop, team fabricators began work on the new chassis at 5am Monday morning.

“There was a lot of damage done to the chassis so we’ve decided that we’re going to put the new chassis into action,” Jones said in a team video from his Albury base.

“I don’t think that this (crashed) one will ever run again to tell you the truth, it’s was a pretty nasty crash.”

The team spent 12 hours completing fabrication work on the new chassis throughout Monday, before dispatching it to the squad’s paint department.

Jones says he expects to have the car back and ready for fitment of its running gear by tomorrow (Wednesday).

The V8 Supercars are required back on track in eight days time for practice at Albert Park’s Australian Formula 1 Grand Prix meeting.

See below for Team BOC’s video with Brad Jones