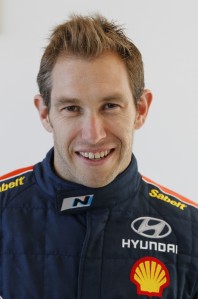 Leading Australian rally driver Chris Atkinson says it is imperative he guides his new WRC ride to the finish in Rally Mexico this weekend.

Atkinson and co-driver Stephane Prevot make their debut in the shared Hyundai WRC i20 which has previously been handled by Dani Sordo and Juho Hanninen in the opening Monte Carlo and Sweden legs.

Hyundai has seen a difficult re-entry this season after a 10-year absence in the WRC although at times the car has shown pace on the icy tarmac of Monte and the snow in Sweden.

Atkinson enjoys a strong affinity with Mexico, recording his best WRC finish when second while in his last year with the Subaru World Rally Team in 2008.

The Queensland driver is sharing the #8 i20 with Sordo and Hanninen this season.

“I think it is important to get to the finish with no problems, if we can do this we will get a good result,” Atkinson said.

“Being the first gravel rally of the year, it will be interesting to see how well the i20 WRC performs in these conditions.”

“I have had several good results in Mexico before including a second place in 2008, so I have some great memories of this rally and the fans in Mexico.”` Final preparations being put on the Atkinson/Prevot car in the service park at Leon, Mexico.

“It is a unique rally with the high altitude and the varied terrain, which makes it a great challenge for the drivers and the cars.”

Both lead driver Thierry Neuville and Atkinson recently tested in Spain to prepare for Mexico which rises to 2700m above sea level that challenges engines and driver fitness.

It was the first time Neuville had driven the #7 i20 he shares with co-driver Nicolas Gilsoul on gravel.

Atkinson says he has not changed his approach in the wake of the announcement that Kiwi Hayden Paddon will join the Hyundai WRC team in a fourth i20.

The fourth Hyundai came as a shock to many with Paddon bringing a decent sponsorship package for his campaign which will be entered as a Hyundai Motorsport N car when it debuts in the Rally Italia Sardegna in June.

See below for Speedcafe video