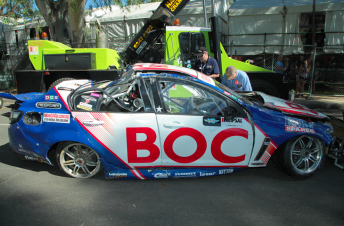 Brad Jones Racing is expected to rush the completion of its spare chassis for Albert Park as a number of teams count the cost of a bruising Clipsal 500.

The car somersaulted onto the tyre barriers in the Senna Chicane after a multi-car accident on a Safety Car restart.

While Bright was able to walk away from the crash, the car sustained heavy damage.

“I’d say that it’s got a lot of damage and won’t find its way back onto a race track, but we won’t know for sure until we get home,” said Jones.

“We need to get it back to the shop and start cutting bars out of it. Then we’ll know how bad it is. Right now I fear that it’s not repairable.”

Bright and the remainder of the V8 Supercars field need to be on track in just 10 days time for the Australian Formula 1 Grand Prix support races at Albert Park.

Although the event is non-championship, teams face a $150,000 fine for failing to show with an entry.

With BJR’s spare chassis currently in an early stage of build, the timeframe will be tight to get it race-ready for the meeting.

“It’s got about another day in the fab shop so it’s a long way from being a roller (rolling chassis),” said Jones of the spare.

“But we’ve got another week (until Albert Park) so we’ll get stuck into it when we get home.

“There are probably some other options if we get desperate, there are a few cars laying around the place, (but) I’m pretty confident that we can get the job done.”

If it is deemed unrepairable, Bright’s car will be the second ‘Next Generation’ V8 Supercars vehicle consigned to the scrap-heap following James Courtney’s crash at Phillip Island in November.

While Erebus and FPR both have complete spare cars should they be required, DJR has no such luxury.

Pye’s Falcon sustained left-front chassis rail damage in a frontal impact during the Bright melee and is expected to be sent to its constructor, Pace Innovations, for repairs.

The team’s sporting director Campbell Little says it will be a tight-turnaround to have the car on track at Albert Park.

“Until we get home we’re not 100 percent sure (what the damage is) but we’ve already booked Pace for when the truck gets back,” he told Speedcafe.com.

“I don’t have doubt that we’ll get there (Albert Park) but the difficulty will be the park-up time.

“We had originally planned for our truck to leave Queensland on Saturday, so we’ll just have to see what happens.

“We’ll more than likely get the chassis done and into the truck and then finish it down there the best we can.

“I dare say there will be a fair bit of carry-on luggage involved.”

Pye missed last year’s championship round at Pukekohe following a crash at the previous event and is desperate not to see the scenario repeated at Albert Park.

“I think it’s especially important at the moment to get as much time on track as I can with my engineer to get a good understanding of each other,” he said.

“The AGP is a good time to change some things and learn a bit more.”

See below for more images of Bright’s crumpled Commodore