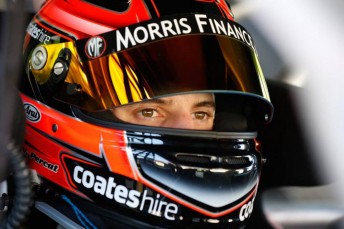 Nick Percat has vowed to learn from the mistake that cost a potential podium finish in his first start as a full-time V8 Supercars driver.

The 25-year-old had been placed third in Sunday’s 250km race at the Clipsal 500 when he clouted the Turn 8 barrier with just five laps remaining.

The Walkinshaw Racing entry was under heavy pressure from a charging Shane van Gisbergen at the time of the crash, which occurred on the third lap after a Safety Car restart.

Starting 13th, Percat had displayed an impressive mix of speed and maturity on his way up the field.

The performance followed a difficult start to the weekend that saw the Coates Hire Holden dogged by an engine misfire, which contributed to lowly 22nd and 15th place finishes in the two Saturday races.

“It was a weekend of highs and lows,” Percat told Speedcafe.com.

“I knew I had to keep hustling the car along at the end to keep Shane at bay because he’d had massive pace all weekend.

“I was just a little too committed through (Turn) 8 when the tyres were still coming up after the restart.

“You live and learn from it, but to start 13th and find ourselves battling for the podium was awesome.

“There were more positives than negatives at the end of the day. It would have been nice to get the result but it wasn’t to be.”

Walkinshaw Racing managing director Adrian Burgess paused his celebrations on the Holden Racing Team side of the four-car garage to counsel Percat on Sunday evening, backing the youngster’s decision to try and hold off Van Gisbergen.

“I spoke to Adrian afterward and he said that when you’re racing for a podium you don’t let anyone go,” added Percat.

“I think that if I’d got through there and the tyres had come up I would have been fine.

“But it was my first real crack at it and it was just a new experience not having the tyres come up as I expected. You just learn from it and move on.”

Describing the incident as “part of his learning process”, Burgess told Speedcafe.com that contending for the podium was a warning to the rest of the field of what Percat can achieve.

“We don’t need to be impressed by him because we already know what he can do,” he said.

“It was a shame for him that he didn’t get to finish the job off because he would have been a worthy podium finisher, but he’ll learn from it.

“Nick knows he did a good job up until that moment and now the rest of the field can see he’s capable of running at the front.”

Both Percat and Burgess were however quick to cut-off suggestions that the Sunday performance could change their targets for the season.

“No, it doesn’t change anything,” said Percat.

“We still just want to be in the top 10 everywhere we go,” said Percat. “That’s the goal for us.”

Added Burgess: “A lot of other things happened around us to put him in that position, so you’ve got to be realistic about what went on.

“We’ve got our own expectations and he has where he thinks he wants to be. He’s shown so far that he’s on target to meet all of those goals.”

Next Story HRT in 'biggest ever' development push