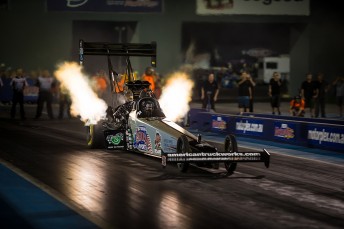 Darren Morgan has shaken up the ANDRA Top Fuel Championship rankings with a stunning weekend at the Perth Motorplex, winning round four and ending the domination of Phil Lamattina.

The big story was Lamattina. The Mildura team had enjoyed arguably its best start to an ANDRA Top Fuel season, winning all three of the rounds held – and producing nine passes that were all within a tenth of a second of one another.

He set a 4.693 second lap in qualifying to be the quick time man, however in his elimination round against Mark Sheehan, he red lighted for the first time since 2012, which eliminated him from any position in the A or B Final.

Morgan got to the final after defeating Damien Harris, whilst Dobson got by Martin Stamatis.

A rejuvenated Morgan was ecstatic with the new car he debuted in Perth.

“We’re really happy with the changes (to the car), it’s perfect,” Morgan said. “Everything is just mint, it goes faster and faster every time we tell it to.

In the other featured category as part of the Westernationals, Top Doorslammer, a first time winner in Daniel Gregorini was crowned.

He had to post personal best times to get the job done though. In his elimination race, he came up against Victor Bray – who won at the Motorplex last year. Bray shut the Sidchrome 57 Chev down early allowing Gregorini to set a 5.921.

In the final, he was due to come up against Gary Phillips. Phillips did not present the Lucas Oils car for the final in the end due to a damaged main rear bearing sustained in his elimination race.

Although he had a solo pass, Gregorini didn’t disappoint, scorching down the track in 5.914 seconds.

“I’ve got posters from when Zap first started when I was seven years old and I’ve been following him since. That was the dream and I finally got here and did it, it’s awesome.”

Speaking of Zappia, he was the fast man during the qualifying rounds, however was knocked out at the elimination stage by arch rival, Peter Kapiris who got a holeshot win.

The B-Final was contested between Ben Bray and Pino Priolo, with Bray’s car leaking fluid and forcing a shut down after the burnout.

Massive crowds were the order of the weekend for the 43rd Westernationals, with the Perth Motorplex recording one of its best drag racing crowds in many a year.

The next round of the Australian Top Fuel Championship will be at Willowbank April 18-19 while Doorslammer’s next Championship hitout will be at Calder Park on April 4-5.