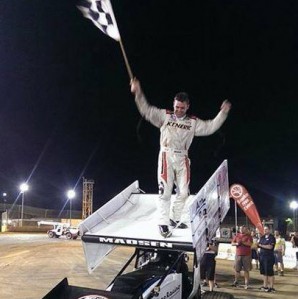 Kerry Madsen returns to America with a further haul for the Keneric Racing team having driven his American Racing Custom Wheels machine to a $20,000 payday at the Krikke Boys Shootout in Bunbury.

One of the most popular races on the Australian sprintcar calendar, the Boys Race saw Madsen and eternal Sydney rival battle it out right the way through the main event.

Tatnell was right on the hammer of Madsen, attempting to take his Krikke Motorsport Cool to the emotional win, however the multiple Australian Champion slammed the wall with four laps to go, thus ending his charge.

That then left Madsen in with a clear path to the chequered flag, which he did with aplomb.

With Tatnell’s elimination, it opened up second placing to South Australian Luke Dillon – who had a big home town support from his Bunbury-owned Diamond Bay Motorsports car, with third place going to Robbie Farr – who now calls Perth home.

Grand Annual Sprintcar Classic winner, Tim Kaeding wasn’t able to back up his night one victory, coming home in fourth position in the second Krikke Motorsport car. He too will now head back to the States to resume STP World of Outlaws hostilities.