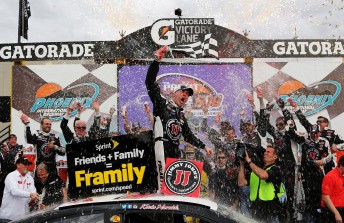 Kevin Harvick has dominated The Profit on CNBC 500 in Phoenix winning his first race since joining Stewart-Haas Racing and setting himself up for a NASCAR title tilt.

Despite it being just his second race with the team, Harvick entered the race as an overwhelming favourite and delivered, despite the best efforts of Daytona 500 winner Dale Earnhardt Jr. It his fifth win at Phoenix and 24th overall for his career.

Harvick led 224 of the 312 laps at the one-mile track, including the final 24, leaving Earnhardt to battle with front row starters Brad Keselowski and Joey Logano, who finished third and fourth, respectively, for Team Penske.

“Man, this just solidifies so many things and so many decisions,” said Harvick.

“It’s been so much work with all the time and effort that these guys (the crew) have put in–but what a race car.

“Rodney Childers has just done a phenomenal job of putting this team together. These guys all want to win. That’s why they came here. That’s why I came here, too.

A challenging race for Australia’s Marcos Ambrose who battled car balance throughout to finish in 22nd.

RESULTS: The Profit on CNBC 500 – Phoenix