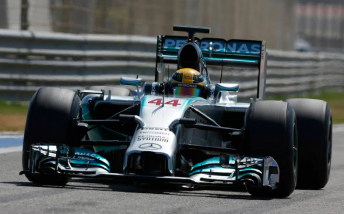 Lewis Hamilton ensured Mercedes finished the final day of the Formula 1 pre-season test in Bahrain on top as Red Bull once again struggled for pace.

After overcoming a gearbox issue which disrupted his morning, the Brit managed to complete 77 laps in his W05, which included a session best time of 1.33.278s.

Valtteri Bottas confirmed Williams‘ impressive pace ahead of the season opener in Melbourne by setting the second fastest time while clocking up 108 laps. The Finn had topped the timesheets for the majority of the session.

The Ferrari of Fernando Alonso was third fastest just a second adrift of Hamilton’s Mercedes.

Meanwhile, Red Bull and Sebastian Vettel continued to struggle with time rapidly running out for the team to correct their issues before the Australian Grand Prix.

However, the team had improved upon Saturday’s performance which restricted Vettel to just one lap. The reigning world champion completed 77 laps but at a reduced pace with the team admitting to a mechanical issue with the RB10’s front end.

By the end of the day, Vettel had clocked the ninth fastest time a full four seconds adrift of Hamilton and Mercedes.

Red Bull were not the only team to incur problems as Romain Grosjean (Lotus), Jenson Button (McLaren) and Nico Hulkenberg (Force India) all suffered from engine failures forcing the trio to end the day prematurely.

Sauber completed the most laps on the day with Adrian Sutil and Esteban Gutierrez completing 177 laps between them.

Marussia were seventh quickest with Max Chilton splitting the times set by the two Sauber drivers.

With just a week and a half until the season opener in Melbourne, it is clear the Renault powered teams have plenty of work to do to ensure they will be on the pace at Albert Park.

See below for the day’s times