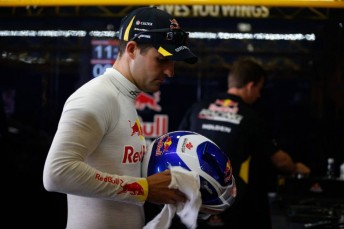 Jamie Whincup’s horror day on the streets of Adelaide has ended with stewards handing down a 25 point penalty for late-race contact with Michael Caruso.

Whincup had been attempting to take sixth place from Caruso on Lap 63 when he locked his rear brakes at the Turn 9 hairpin and slid into the Norton Nissan.

Both cars were garaged for repairs following the clash, with Caruso eventually finishing 14th and Whincup 15th.

Caruso had labelled Whincup an “idiot” over his team radio following the clash.

The careless driving penalty drops Whincup from fourth to seventh in the standings and comes after a controversial late-race pitlane penalty curtailed an almost certain victory.

Percat made contact with Caruso in Race 1, while Courtney was blamed for a Turn 4 fracas involving Lee Holdsworth and Scott Pye.

An investigation into Russell Ingall’s collision with Wood at Turn 5 during Race 3 is yet to be concluded.