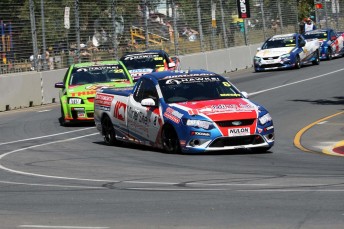 David “Sideways” Sieders has claimed the Australian V8 Ute Racing Series round – protected by HAWKEI – on the Adelaide street circuit this weekend.

After the three-race format Sieders landed the final race, bagging two wins and a pole in his Mine Site Fencing Australia Falcon.

The 29-year-old from Sydney ended a drought on a weekend he hoisted his 100th Ute race.

“We’ve had two very lean years here, so it’s great to finally come back through for a win this time around,” Sieders said.

“We haven’t had much luck in races here since we upgraded to the FG, so it’s a relief to finally get back on the podium.

“It’s the perfect way to start any season, and really puts you in a good frame of mind going forward, so we’re all pretty happy right now.”

Sieders started on pole for the second time this weekend in the final heat and was only troubled on the run to the chicane, before being able to comfortably pull away for another race win whilst the field battled behind him.

“I didn’t have a great jump off the line and had (Craig) Dontas pressuring from behind on the run to turn one, but I was able to hold him off and then take the advantage out of the chicane, after running through side-by-side with (Wayne) Wakefield, then I just watched them fighting each other in my mirrors.”

Sieders’ wins give him a 16 point advantage in the Championship after the opening round, with the Series having a 10-week break before heading to Barbagallo Raceway in Perth for the next round from May 16-18.

“What a great start to the championship,” Bowe said.

“The racing was close all weekend and Mustang Sally never missed a beat.

“While it’s always nice to win races, coming away with the championship lead makes me very happy indeed”. he added.

Queensland’s Brendon Pingel claimed the final heat of the Aussie Car round in his Holden Cruze.

Young, though, managed to compile 247 points across the four races, to pip Pingel by one point.

Adelaide driver Simon Hodge won the Formula 3 feature and completed a clean sweep of the weekend.

Ben Gersekowski’s McDonald’s Gilmour Racing Dallara fired off the line in the 10-lap race and led the race early, with Hodge’s Team BRM Mygale keeping a watching brief behind.

The pair battled early in the race on both the start-finish straight and in the braking zone at turn four – where the decisive move for the win would come on the eighth lap.

Hodge, having had a good run through the Senna Chicane, launched a move up the inside of Gersekowski and executed the pass.
Hodge’s win launched him to a clear championship lead after the opening round of eight, ahead of Gersekowski.

“I’m still pinching myself and I can’t quite believe it, to be honest,” Hodge said.

Gersekowski’s second place finish was the best of his Formula 3 career and placed him as a contender this year.

The 17-year-old Formula 3 rookie Chris Anthony completed the podium in a dream debut that saw him achieve a childhood aim – standing on the Adelaide street circuit rostrum.

Round two will be held at Sandown Motor Raceway with the Shannons Australian Motor Racing Nationals, from March 28-30.