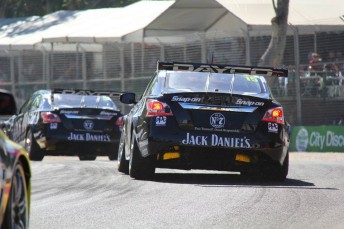 The Nissan Altimas could grow in number for Bathurst

A fifth Nissan Altima is looming as a possibility for this year’s Bathurst 1000 as part of the company’s GT Academy.

Nissan on Thursday launched an Australian version of its Playstation-based GT Academy, which gives gamers the opportunity to put their virtual skills to the test in real Nissan race cars.

The company’s Australian motorsport manager, Jeff Fisher, has subsequently flagged interest in running a wildcard entry at Bathurst as part of the program.

Although the timing of the October race would rule out any Australian competition participants racing the V8 Supercar, Academy mainstay Alex Buncombe and past winners such as Lucas Ordonez could be in the frame for a seat.

Fisher is adamant that a wildcard is a realistic proposition for this year.

“I look at these things and think, if you want to have a go at it, you should do it now rather than put it off for 18 months and have that long gestation period,” Fisher told Speedcafe.com

“We looked at what Triple Eight did with Microsoft last year and thought that was very worthwhile in terms of the traction they got with that from the team’s side and from xBox and Microsoft.

“To their credit the Microsoft people activated really well and backed it with a lot of other collateral and didn’t just do the car and leave it there.”

The wildcard plan has been discussed at top level with the scheme confirmed by Nissan Australia managing director and chief executive Peter Jones.

“And I’ve told him it would be a desirable thing for us here.

“There has already been a precedent set by Triple Eight and we think it would work well for us.

“Now that we are holding hands with Sony Entertainment with the GT Academy, that sort of property for them would be a perfect articulation to what they are about.

“In terms of timing our Academy winners will be over in Silverstone later this year. So the question is whether it’s the right time.”

Fisher added that a detailed financial plan must be finalised along before any decision is made.

“I still think its do-able but it depends on a whole bunch of things. It would have to make sense from a financial perspective.”