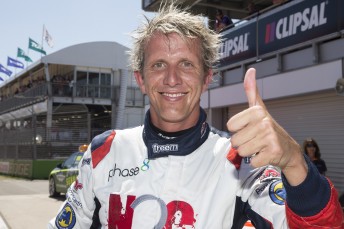 Warren Luff was untouchable in the Carrera Cup

Warren Luff has swept all three races in the Carrera Cup to kick-start the new Type 991 Porsche in Australian competition.

The 10-lap scheduled race journey was reduced by two laps after Roger Largo (JBS Swift) had technical issues, and then stranded his car across the pit-exit curbing. This meant Luff could race without the pressure of worrying about losing performance from his Michelin tyres. Back in the pack the Davbridge Constructions Porsche of Shae Davies attacked and climbed to as high as fourth by passing Nick McBride (Sonic Motor Racing Services). McBride returned serve and the two touched with Davies suffering steering damage and fell back to ninth at the finish, one place behind multiple champion Craig Baird (Bonaire/Wilson Security).

Luff’s perfect weekend was complete as he won from Richards and Foster and in the process opens a handy points lead.

The Carrera Cup will be back on track at the Australian Grand Prix meeting. Unlike the V8 Supercars, championship points will be on the line across three separate races.

VIDEO: Luff and Bates speak after the final race

Previous Story Luff two from two in the Carrera Cup