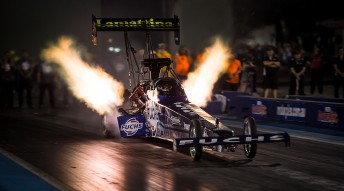 Phil Lamattina has continued his outstanding run of form at the Perth Motorplex, winning round three of the ANDRA Top Fuel Championship and remaining undefeated in season 2014, whilst Peter Kapiris got his Top Doorslammer Championship account underway in the best possible fashion.

The consistency that Lamattina and crew chief, Aaron Hambridge have been trying to dial into the Fuchs/Elders dragster appears to have arrived in spades, with the Mildura carrot farmer blasting a triumvirate of 4.6 second passes.

The sweetest came in the final when he met up with returning Australian Champion and rival, Darren Morgan. Whilst using the Motorplex weekend as somewhat of a test session, Morgan was able to blast a trio of 4.8 second passes. This, however was not enough to stall the rampant Lamattina.

“The car was coming around, the track was coming around and in the final we had Darren (Morgan) and we thought if we ran another low .60 we’d be all good and what did we do? We ran a 4.61 at 327 mph,” said Lamattina.

The B-Final went the way of Martin Stamatis in a difficult affair. Harris’ Rapisarda Autosport International machine went bang at half track, whilst Stamatis crawled over the line.

In Doorslammer, the crowd was treated to the full field doing two passes during the course of the night in both qualifying and the elimination rounds.

Grant O’Rourke set the pace in qualifying, but the big drama surrounded defending Champion, John Zappia. He collected the wall in his field setting pass, qualifying 19th. It forced the Striker Crushing and Machining crew to work overtime to have the local crowd favourite on track.

In the main dance, Kapiris got through the eliminations with a 5.852. Under the format which sees the fastest two winners make it into the final, he was joined by Mark Belleri who set a 5.952.

The pair put on a messy  display, with Belleri getting the holeshot before the blower belt came adrift, leaving Kapiris to sputter his way to the first silver Christmas tree of the season.

“The final wasn’t real good, that was partly my fault. Mark pre-staged and staged in one hit and that threw me. The RPM was all over the place which is why I went up in smoke,” said Kapiris.

“The car is doing everything it’s supposed to no matter what we’re throwing at it, it’s responding.”

The field will re-set and go through the same process of three rounds of racing again tonight to complete the 43rd Westernationals.