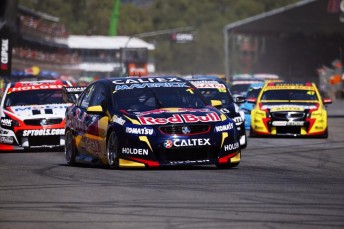 Jamie Whincup led away from the start

Whincup had dominated the 250km race until being forced to take a drive-through penalty with just 20 laps remaining.

Officials had deemed that the car controller had breached the regulation stating that he “must not undertake any work at all on a car at any pit stop”.

The team’s argument that the car controller had touched the car but not worked on it subsequently fell on deaf ears.

“He touched the car but didn’t do any work on it and in my book it doesn’t warrant a penalty,” Dane told Speedcafe.com.

“So they (stewards) have chosen to say that the definition of working on the car is touching it.

“At what point does touching become working? Anyway, now we know that touching a car is working on it.

“The stewards’ interpretation of things is not necessarily what an average human being would think.”

Red Bull confirmed that Mark Dutton had approached stewards for clarification on the situation prior to Whincup taking the drive-through.

According to Dane the penalty was not triggered by officials in the pitlane.

“The officials down here in the pitlane told me they had no part in it in which case fair enough its just the stewards – a bunch of blokes upstairs who don’t know the sport that well.”

Whincup rejoined from his penalty in eighth, but eventually finished 15th after a bungled pass on Michael Caruso’s Nissan required repairs to the Holden’s front-end.

“We were in the box seat, we did everything we could to be in the best position with good tyres and we were well up the road.

“Most of the time we manage to pull it off, but not today.

“We always want to start the season well, we’ve got good car speed which is a silver lining but we’re down the order and going to have to start by fighting our way up.”