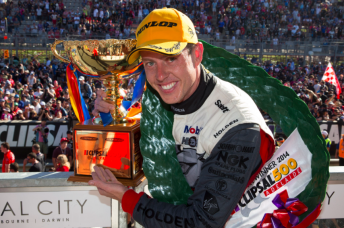 James Courtney and the Holden Racing Team prevailed in a dramatic final race at the Clipsal 500 in Adelaide.

After a 250km encounter packed with incidents and controversial penalties, Courtney was left to fend off Lowndes in a seven-lap shootout.

Lowndes had lost position to Courtney while saving fuel early in the final stint and could not find a way back by the HRT Commodore.

Jamie Whincup had been in the box seat to win the race until a pitlane penalty for the car controller touching the #1 Holden in its second pitstop.

Whincup eventually finished 15th after being further delayed by a clash with Michael Caruso in the closing stages.

The race was punctuated by a major accident for Jason Bright that saw the Team BOC Holden roll-over at Turn 1.

The former Bathurst winner emerged unscathed from the incident that also put paid to the chances of Garth Tander, Lee Holdsworth, Chaz Mostert and Scott Pye.

Scott McLaughlin had appeared destined to take a second straight podium for Volvo before an electrical problem saw the S60 grind to a halt on the circuit.

Nick Percat was left to fend-off the remainder of the pack after the resulting Safety Car restart, but clouted the Turn 8 wall with just five laps remaining.

Van Gisbergen had restarted sixth, but made short work of Tim Slade and Fabian Coulthard before benefitting from Percat’s mistake.

Will Davison had also tasted the Turn 8 concrete earlier in the race; crashing out after a touch from James Moffat’s Nissan.

Lowndes leads the points standings after the first three races of the season from Coulthard, Van Gisbergen, Whincup, Rick Kelly and Courtney.