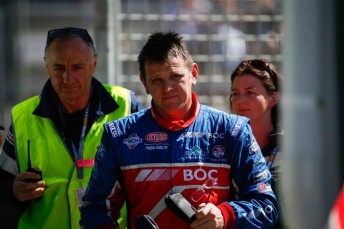 A multi-car accident that took five cars out of contention at the Clipsal 500 has led to a flurry of calls to change new Safety Car restart procedures.

Jason Bright was lucky to escape injury in the incident that saw his Team BOC Holden rolling onto the tyre barriers at the Senna Chicane.

The Safety Car restart rules have been changed this year, requiring the leader to maintain a speed between 50km/h and 60km/h prior to a designated ‘Acceleration Zone’.

The slow speed and lateness of the acceleration process ensured cars were heading into the chicane three and four wide.

The complexity of the rules also resulted in pitlane penalties, with leaders Shane van Gisbergen and Rick Kelly deemed to have jumped too early on the restart that led to Bright’s crash.

“We are doing 50 and 60km/h in first gear and you are trying to get drive. You are just asking for trouble,” Bright told Speedcafe.com of the situation.

“We are being treated like school children. The leader should get to control the race.

“In other categories the advantage gets paid back to whoever is in front. I can’t say I’m a fan of it (the new rules).”

The cars of Chaz Mostert and Scott Pye were also eliminated in the crash, while the Lee Holdsworth and Garth Tander entries took damage that required several laps to fix.

“I don’t really know what the go is with the new rules but it’s shocking. It should just go back to the old way.” 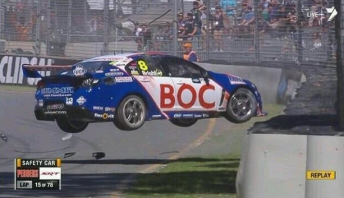 Bright’s car was heavily damaged in the accident. pic: network 7

Pye was also left frustrated, expressing concern that creating a ‘show’ is coming at the expense of driver safety.

“When you’ve got 25 cars trying to go through the same corner within a few seconds, it’s going to be disastrous no matter what,” he said.

“When you’re three or four wide it’s obviously going to end up in disaster. It’s pure luck whether you get through.

“I’m sure the crowd enjoys seeing the action and everything but at the same time I think it puts our safety at risk.

“Crashing comes with the job but when it’s caused by someone who has decided that this is going to make the racing more interesting then that’s disappointing.”

Red Bull team owner Roland Dane was one of several to suggest that more circuits need to be visited before the system is scrapped.

“I think we will need to sit down and have a good think about it afterwards to see in a race or two whether it carries on being the same issue as it was here,” he said.

“We have to consider whether its worth all the money to repair the cars.”

Bright also thought the circuit was partially to blame, with the three-wide squeeze between Tim Slade, Tander and the Team BOC Holden avoidable if not for the tyre bundle at the apex of Turn 1.

“That tyre bundle at turn one should not be there,” he said.

The restart controversy follows the dumping of the new-for-2014 60/60 Super Sprint format that saw the ‘Acceleration Zone’ introduced for double-file restarts.

The previous single-file system of the leader being able to accelerate away once the Safety Car was in pitlane also had its downsides, as most notably witnessed at the Circuit of the Americas last year.