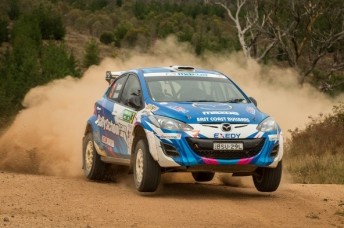 In a perfect start to his Australian Rally Championship Brendan Reeves has won both heats of the National Capital Rally in Canberra.

Along with sister Rhianon Gelsomino, the pair took their RallySchool.com.au Mazda2 through a tough battle with Scott Pedder (Renault Clio) with victory today only decided on the final stage.

Reeves started the first day with a 3.3-second win over Pedder. Reigning ARC champion, Eli Evans, was unable to re-join the rally today after breaking the driveshaft on his borrowed Volkswagen Polo yesterday. This meant that the scene was set for a full-on battle for Heat 2 honours between Pedder and Reeves.

Pedder claimed a win on the second stage of the day, but at the lunch break, with four stages completed, and with three of those to his name, Reeves held a slender two second lead.

The final three stages of the day were a real tussle. Reeves won the first by one and a half seconds, but Pedder bounced back on the penultimate stage with a 4.7 second victory, giving him a 1.2 second margin with just one stage to go.

Reeves went into the final stage with one goal in mind – to claim back the lead, and he did that in style, winning the stage by 6.6 seconds and claiming the Heat win by 5.4 seconds.

After winning the Power Stage on Friday and both Heats Reeves and Gelsomino take maximum points away from the weekend.

“What an awesome feeling it is to be on the top of the podium,” said Reeves.

“We had a fantastic run again today. The battle with Scott (Pedder) was hot and I’m so happy that we were able to nail it on the final stage.

“Once again the Mazda2 ran perfectly and I thank our hard working team for that.”

Reeves and Gelsomino will head into round 2 of the Australian Rally Championship, the QUIT Forest Rally in Busselton (WA) on 4-6 April.