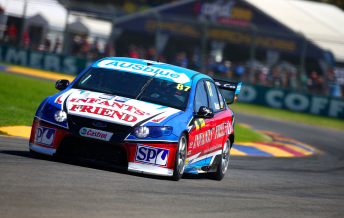 Ash Walsh backed up his Race 1 victory with pole position for the second Dunlop Series encounter in Adelaide.

The Ford Performance Racing entry repeated its Friday trick of setting an early benchmark before retreating to pitlane.

On this occasion, though, a quick lap by Walsh forced Waters to return to the circuit.

Waters went faster than his rival to the end of the second sector on his final lap before a spin at Turn 9 curtailed his run.

Paul Dumbrell had also eclipsed Walsh over the first two sectors only to end up third.

It had been a messy session from the Eggleston Motorspot driver that saw two of his last five flying laps deleted for kerb hopping at Turn 2.

Fastest man in the bottom 50 percent session, Todd Hazelwood, ended the half hour in 13th.

The lower runners all benefited from the misfortune of Geoff Emery, who will start last after spinning into the Turn 4 tyre barrier on his second flying lap.

The second and final Dunlop Series race of the weekend will be held between Races 1 and 2 of the V8 Supercars Championship season later this afternoon.

See below for the full Race 2 qualifying result

Next Story Dumbrell wins as Waters and Walsh collide