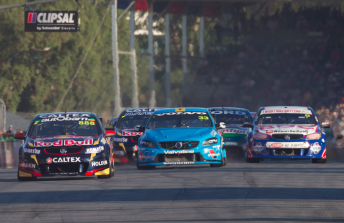 Lowndes led away from pole

A popular second place finish for Scott McLaughlin and debutant Volvo stole the limelight from winner Craig Lowndes in Race 2 at the Clipsal 500.

Starting second, the 20-year-old McLaughlin could not hold out Jamie Whincup early in the race but regained the place after a slow pitstop for his rival.

A Safety Car for debris after just 15 of 39 laps ensured an early end to the pit cycle and a flat-out sprint to the flag.

After the restart, Whincup made short work of Mark Winterbottom to claw onto the tail of McLaughlin, but proved unable to do anything about the rapid Volvo until the final lap.

Taking the place around the outside of Turn 9, Whincup then made an error at the final corner that allowed McLaughlin through once more, much to the delight of the vocal crowd.

Almost five seconds up the road, Lowndes had cruised to victory, squaring the ledger with his team-mate at one-all after two races.

Winterbottom held on for fourth ahead of Fabian Coulthard, Chaz Mostert and Garth Tander.

There was heartbreak for Dick Johnson Racing and Scott Pye, with the Adelaide-raised driver punted out of fifth by Shane van Gisbergen mid-race.

Van Gisbergen received a drive-through penalty for his misjudgement and later endured a second incident, this time a scrape with Tim Slade, on his way to 16th.

Also in the wars were James Courtney and Lee Holdsworth, who saw top 10 runs evaporate when a touch peeled the left-front door off the Holden and punctured a tyre on the Mercedes.

Will Davison meanwhile gave Erebus some reward with 10th, taking the flag in the middle of the Michael Caruso-led Nissan Altima quartet.