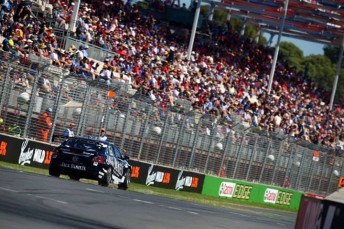 V8 Supercars CEO James Warburton insists that the championship will be seen by ‘more eyeballs than ever before’ from 2015, despite the shift towards pay television.

Warburton confirmed at a press conference in Adelaide this morning that only the Adelaide, Townsville, Sandown, Bathurst, Gold Coast and Sydney events will be shown live on Network Ten under the six-year Fox/Fox Sports/Ten agreement.

One-hour highlights packages of the remaining events will be screened at 8:30pm on One and 11:30pm on Ten on the Saturday and Sunday nights of the events.

Sundays will also see the one-hour highlights package broadcast on Ten from 4:00pm.

Warburton insists that the improved consistency and new timeslots for the free-to-air material will help ensure the total audience levels do not fall.

“They will increase significantly,” he said of the crucial “total eyeballs” figure.

“(Currently) five of our races are on a main stream platform (Seven). Then we’re on 7mate and 7Two and the like.

“Eighty percent of our fans in the research we’ve done don’t (currently) know what channel the next race is on and 68 percent of our eyeballs are on those races that will be simulcast.

“This is about growing the penetration… putting the highlights packages into a prime-time slot that every fan knows where it is.”

Warburton would not be drawn, however, on just how much it will cost fans to purchase the package required to see the full season live on Fox.

“It’s not our place to do so,” he said of pricing for a “V8 package”, which isn’t likely to be launched until later in the year.

Warburton stressed that the improved terms of the deal are vital for the viability of the category’s teams.

“We’ve seen what’s happened in the last couple of years and we have to ensure that we have a sport to watch.”

V8 Supercars says that the total hours of its TV coverage will increase to 1140 hours from 2015; up 360 percent on current levels.

The programming will see magazine show RPM return to Ten, while the Fox coverage will include V8Xtra and Motorsport 360.

Races will also be available live and on demand via the Foxtel Play internet television and Foxel Go mobile platforms.