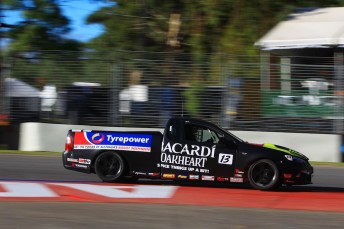 Wakefield started the reverse grid battle from pole in his Bacardi OakHeart Ford, and he made the most of the position to head Pretty into the first corner.

The former Bathurst 1000 polesitter held his nerve throughout to take the chequered flag from Pretty and Jesse Dixon.

“I’m back. It’s been a long time coming, last year was pretty frustrating, we got amongst it a few times but my car wasn’t quite good enough,” said Wakefield.

Reigning champion Ryal Harris recorded his first retirement in four years after a coming together with Ryan Hansford and Kris Walton on lap five.

Harris felt the incident could easily have been avoided.

“Three into one of the tightest corners on the track never works, I don’t know what Ryan was thinking. I shouldn’t complain too much – it’s the first DNF I’ve had since 2010 so we’ll recover, everyone else does, so we’ll figure a way out to make it happen,” said Harris.

King, behind the wheel of his Chevrolet Camaro, managed to come through a start line accident which brought out the safety car.

After slipping underneath Jason Gomersall’s Holden Torana for the lead shortly after the restart, he eased to the chequered flag.

John Bowe fought his way through the field to grab second with a last ditch move on Keith Kassulke at the final corner of the last lap.

The talking point o the race came at the start when the front row starting Carey McMahon appeared to falter from the line. This in turn caused Bill Pye and Brad Tilley to make heavy contact.

Race one winner Tony Karanfilovski was caught up in the impact and forced out of the race as a result.

Gomersall led the early exchanges after the restart before King forced his way into the lead. A five car battle for second developed but in the end it was Bowe, who came through to take the spot ahead of Kassulke.

The former Formula Ford racer led all 15 laps on the Adelaide streets in his Mygale M11 before taking the chequered flag from Gilmour Racing’s Ben Gersekowski and Arrie Maree.

While Hodge seemed in control from the start, Gersekowski leapt from fifth on the grid to finish the race comfortably ahead of Maree in third.

A faulty clutch put experienced racer John Magro out of the race.

Pingel and Darren Chamberlin fought hard for the lead in the opening laps before a spin for Chamberlin dropped him down the order.

In the end, Pingel came through to take the chequered flag as he held off Adam Uebergang and Trent Young.