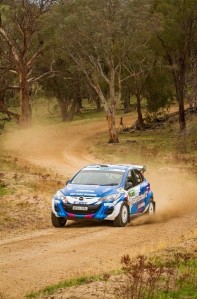 Brendan Reeves has had the perfect start to the Australian Rally Championship, taking Heat 1 honours in his RallySchool.com.au Mazda2 at the National Capital Rally in Canberra.

After claiming victory in yesterday’s Power Stage, Reeves started the day full of confidence and feeling extremely comfortable in the car. Morning rain was a welcome sight to Reeves and his co-driving sister, Rhianon Gelsomino, as they made their way to the rally start. Prepared for dry and dusty conditions, rain eliminated any likely dust problems.

The rain did make driving conditions challenging with a lot of rain falling on some stages, and intermittent showers falling on others, making it difficult to know whether the roads would be slippery or provide plenty of grip.

Reeves’ day started well and even with a slight overshoot on the first stage of the day, he still finished the stage just 7.5 seconds behind Scott Pedder (Renault Clio R3). He then dominated the remaining three morning stages, winning each one and taking a one minute 26 second lead into the afternoon.

Reeves’ main rivals, reigning ARC champion Eli Evans, and 2013 front-runner Scott Pedder, both suffered mechanical problems during the morning stages which meant they were unable to complete all eight of the day’s stages.

A solid drive of the afternoon’s stages (a repeat of the four run during the morning), saw Reeves finish with a margin of 3:00:7 over Mackenzie.

“We’ve had a fantastic day,” Reeves said. “The car was perfect all day and apart from badly needing a wash now, it needs nothing done to it.

“Some of the conditions out there today were pretty tricky, and after a really good run this morning and just after lunch, we decided not to take any risks and we backed off for the last two stages of the day.

“It’s hard to believe this is my first Heat win in the ARC, but it’s an awesome feeling which I hope will continue tomorrow.

“It’s a real shame that we weren’t able to have a full-on battle with Eli (Evans) and Scott (Pedder) today but I’m sure we’ll have a fight on our hands tomorrow.”