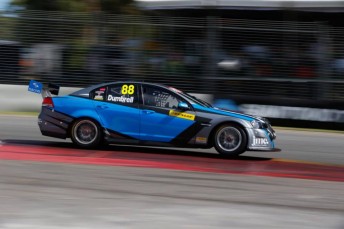 Paul Dumbrell swept to victory on his return to the Dunlop Series after a dramatic clash between Cameron Waters and Ashley Walsh in Race 2.

Pole-sitter Walsh lost the lead to Waters off the start, but refused to let his rival get away.

Closing the gap through mid-race traffic, Walsh attempted to take the lead when Waters ran wide at Turn 4 on Lap 23 of 27, only to fail to leave room for the FPR Falcon on the exit.

The resulting contact between the pair damaged Waters’ front-right suspension and sent Walsh into a spin.

Dumbrell moved through to the lead before cruising home to the race and round wins four seconds ahead of second-placed Taz Douglas.

“It’s not the way you want to win the race and we certainly didn’t have the quickest car,” said Dumbrell, who had last won in the second-tier series during his most recent outing at Mallala in 2002.

“We were third quickest and that’s where we finished yesterday. There’s a bit of work to do but it was good fun.”

Walsh secured third for the round with sixth in the Race 2 while Waters limped home 22nd.

Walsh later said that he had thought he’d left enough room for Waters when the cars made contact.

“We were catching some backmarkers and I knew Cam was a little vulnerable,” he said.

“He made a bit of a mistake, I went up the inside and I thought I’d cleared him and we touched wheels on the exit and you saw the result.”

The Dunlop Series will continue at Winton in April.

See below for total meeting points