Brad Keselowski on pole at Phoenix

Brad Keselowski on pole at Phoenix 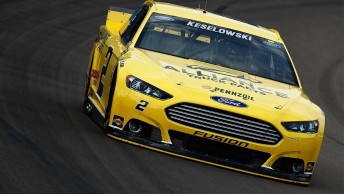 Brad Keselowski will start off pole at Phoenix

Similar to Formula 1, where cars all start on the track together before the top-12 runners contest the final run for pole. The 2012 Sprint Cup champion set a new track qualifying record of 224.317 km/h (139.384 mph) with his Penske Racing team-mate Joey Logano set to start alongside.

Both Logano and Keselowski only ran two laps in the first round before settling on their positions of first and second, respectively. It is Keselowski’s first pole win at Phoenix.

“We had a really fast car and there is some pride to be taken in being the first one to win a Sprint Cup pole in this format,” said Keselowski.

“I am sure it will undergo a few adjustments along the way but it is very rewarding and a testament to my team and how fast of a car they gave me. Then it was just a matter of executing on my end. We were able to do that. I dind’t think I ran a good enough lap to be quite honest. When they told me the time, I said, Alright, I will take it.”

Lining up third on Sunday will be Jamie McMurray, with Jimmie Johnson and Daytona 500 winner Dale Earnhardt Jr. rounding out the top five.

After the first round of qualifying, the fastest 12 cars went on to qualify for the pole. Kevin Harvick finished 13th in round one and was not eligible to qualify in round two and will therefore start from 13th.

“No one really knew what to expect going into this qualifying session,” said Ambrose.

“Our initial time was in the top-10, but it just didn’t stick. I think there were just so many different strategies in play, and once you did a run, it was really hard to get your engine cool enough to make another go at it.

“We went out at the end of the first session for another try, but the car just didn’t work in the centre like we needed it to.”