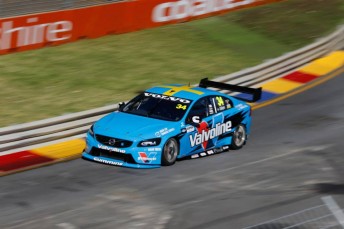 Robert Dahlgren in the second Volvo on track in Adelaide

Missing from the first half of the session due to a power steering issue, McLaughlin was immediately on the pace once he joined the circuit.

The Tekno Autosports driver had knocked Rick Kelly off the top spot after 15 of the 30 minutes, before eventually trimming his own benchmark as the chequered flag flew.

Van Gisbergen won the Sunday race at last year’s Clipsal 500 but isn’t getting carried away with thoughts of a repeat.

“It’s good to be top, but it doesn’t really mean much,” he said after the session.

“Our tyres were pretty good then and you don’t know what everyone else is got.

“The car isn’t perfect yet. There’s a lot that we want to do to make it better.”

McLaughlin meanwhile confirmed that he was on “pretty good” but “not green” tyres.

“We had to try to see what we had because we didn’t have a lot of time, so we put our good tyres on and away we went,” he said.

“But far out, to be P4 in the first session, that’s awesome.”

Team owner Garry Rogers added that his team has high expectations for its first weekend with the Volvo package.

“We don’t leave home thinking we can’t win,” he said.

“They (the GRM personnel) are the same blokes who built the Commodores we won with last year and full credit to Volvo, they have done a great job (on the engine).”

The session was relatively free from drama, with a late trip up the Turn 4 escape road for Mark Winterbottom one of few notable miscues.

Winterbottom ended the session as the fastest of the six Fords in just 14th.

It was also a quiet start to the season for Erebus Motorsport, whose drivers Lee Holdsworth and Will Davison were 16th and 21st respectively.