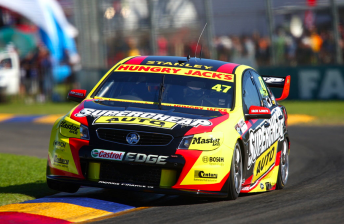 Tim Slade put Walkinshaw Racing atop the time sheets in the second V8 Supercars practice session of the weekend at the Clipsal 500.

Slade’s best of 1:21.15s came at the end of a three-lap spell during his second of three runs.

The fastest times were almost half a second quicker than those seen during the morning.

Slade admitted that he had good tyres to use in the session, which marked just his second official hit-out since switching from Erebus Motorsport to the Holden team.

“It’s going fairly well so far but it’s only practice and you don’t know where everyone else is at,” he said.

His session included an off at Turn 11 that was blamed on low front-tyre temperatures.

It was a tougher second session for the Volvos as team-mates Robert Dahlgren and Scott McLaughlin ended up 20th and 23rd respectively.

The latter’s S60 broke an anti roll-bar adjuster during the run and ended up a second away from the pace.

The 30 minute session again ran without a red flag stoppage.

See below for the session result

Next Story BJR sets the benchmark ahead of qualifying