Shae Davies with his first pole award in the Carerra Cup

Shae Davies has scored his first pole position in the Porsche Carrera Cup, edging Steve Richards in a record breaking session in Adelaide.

Driving the Davbridge Constructions 911, Davies also scored bragging rights as the first winner of a pole award aboard the new-generation Type 991 Porsche 911 GT3. 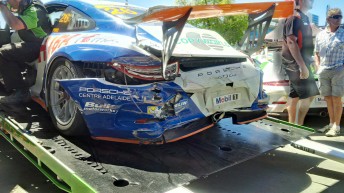 In a swaying battle at the top of the time sheets Richards, Nick Foster (Sonic Motor Racing Services) and Warren Luff (No Second Chance/Phase 8) traded fastest times before Davies struck the final blow with a 1:21.5255 to beat the lap record set by Luff yesterday by 0.2-seconds.

One driver with plenty to do is multiple champion Craig Baird (Bonaire/Wilson Security), who will start this evening’s opening 15-lap race from 10th place on the grid.

Shane Smollen in the McGrath Estate Agents 911 will head the Elite field after setting the 11th time of the 23 car field.

A crew with some work on their hands is the Copyworld Porsche of Michael Almond who found the fence in the dying seconds of qualifying existing Turn 8.

The first race of three gets underway just after 7pm local time this evening.