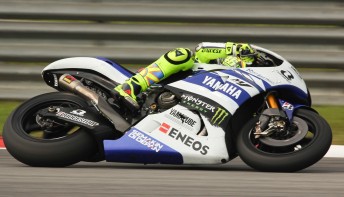 Valentino Rossi on the pace at Sepang

Valentino Rossi and Dani Pedrosa have finished the final day of the ‘Sepang2’ MotoGP test with an identical lap time as preparations for the 2014 season will now switch to Phillip Island from Monday.

Both Yamaha Factory Racing and Repsol Honda machines set a time of 1:59.999 with the overall pace of the second round of testing some 0.466s slower than the best time set by World Champion Marc Marquez – who missed this test due to injury. 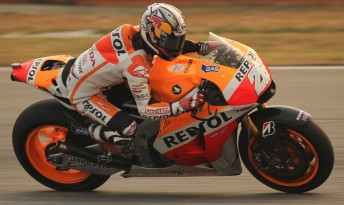 After testing concluded the Ducati Team confirmed that it will enter the ‘Open’ class for this season, meaning that it will use standard electronics software and will benefit from the greater engine allocation permitted in the new regulations.

Pedrosa backed-up his Thursday effort when he was fastest, while despite this being his 15th season in the premier class Rossi was a pace setter. On the other side of the Yamaha garage it was a frustrating day for Jorge Lorenzo who was seventh.

Ducati’s Andrea Dovizioso ended the test 0.068s off the top pace in third. The data gathered by him and his fellow Ducati riders allowing the Italian factory to make the decision on opting for ‘Open’ class this season.

Aleix Espargaro was once again quick in fourth best overall, while Stefan Bradl was fifth and the fastest rider on the first day, Alvaro Bautista, in sixth.

Randy de Puniet carried out development work for Suzuki, which aims to return to MotoGP in 2015. The Frenchman concluding Friday’s test in 12th, his best lap time down to 1.431s off the top – compared with 2.953s at the end of Sepang1.

The Ducati, Honda and Yamaha factory teams now head to Phillip Island for a tyre safety test from 3rd-5th March, though MotoGP title holder Marquez will again miss the trip as his recovery from a fibula fracture continues.