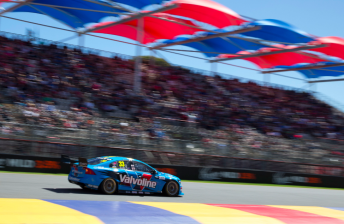 The V8 Supercars paddock was quick to pay tribute to the hard work of new player Volvo after Scott McLaughlin’s front-row performance in qualifying for the Clipsal 500.

The Swedish manufacturer has joined the championship in the second year of the Car of the Future regulations, following on from the entry of Nissan and Mercedes-AMG in 2013.

While results proved lean for the two teams developing their new engine and aero packages last year, Volvo has fired out of the blocks with a competitive package.

The S60 V8 Supercar is the result of the collaboration between Garry Rogers Motorsport, which developed the bodywork to be attached to its existing chassis and suspension package, and Swedish engine supplier Volvo.

McLaughlin showed the first sign of the car’s potential with fourth in opening practice in Adelaide, before ending the day by qualifying fifth and second for the respective Saturday races.

Red Bull Racing’s Craig Lowndes narrowly edged McLaughlin to the Race 2 pole and later expressed his pleasure at seeing a new player among the front-runners.

“Its only good for the sport to have more manufacturers (not only) involved but in a position where they are vying for a podium as well as a race victory,” he said.

“It’s great to see Volvo up there.”

Suggestions that the Volvo would be a force in Adelaide began to spread after V8 Supercars’ aerodynamic homologation testing in January.

The GRM outfit took an extensive array of aero pieces to East Sale with which to tailor its package to the baseline Ford Falcon.

The team subsequently arrived at Sydney Motorsport Park’s pre-season test with a homologated aero kit that provided a visibly well-balanced platform from the outset.

Erebus general manager Ross Stone complimented the Volvo team on its work, although added that only time will tell if V8 Supercars’ contentious open-air aero testing procedure has delivered a level playing field.

“They’ve obviously had a year running the (COTF-spec) cars, so they had to swap the panels and the engine and they were away.

“They’ve had a fair amount of time to sort it out as well and they’ve used it well. You’ve got to congratulate them.

“It’s too hard to tell with the aero at the moment where it all is,” he added.

“We’ll have to wait until we get to some of the other circuits with that.”

“They’ve obviously worked really well with the Polestar guys and put together a really good outfit, which a lot of people knew that they would,” he told Speedcafe.com.

“We’ll need to have a closer look at it to see if there’s anything (areas of performance) that stands out compared to the other cars.

“If not it’s a bloody good job from those guys to have put that program together and roll out where they have. Well done to them.”

All five manufacturers had reason to be encouraged on Friday as they each had at least one car in the top seven across the two sessions.

Stone believes that a podium isn’t out of the question for Erebus after seeing his charge Lee Holdsworth secure sixth on the grid for Race 2.

Traffic, however, ensures Holdsworth will only line-up 16th for Race 1, while poor track position in the sessions was also partially blamed for new recruit Will Davison’s poor day.

“It’s going to be the old story of just starting the points bank, but any result is possible for us,” said Stone.

“I have absolutely no doubt in my mind that we’re on the improve. I know we are.”

Kelly himself had sat in the top two for much of the first session before falling to seventh.

The Altimas were among the most consistent performers throughout the day and are also eyeing the top five tomorrow.

“I think we’ve jumped a fair way up, especially compared to what we had here last year,” he said of his own team’s performance.

“There’s still a few areas where we can do a better job, so there’s certainly the potential to go from the back half of the top 10 to the top half.

“The races tomorrow will really be a good test of where we are because we were really driving around by ourselves all day.

“When we get onto the back straight on the first lap we’ll see where we really sit.

“Hopefully we can hold our own or even improve a little bit. That’ll be a really solid start to our year.”

Unusually, it had been Ford that appeared the least competitive marque for much of the day before FPR’s Mark Winterbottom and DJR’s Scott Pye upped the ante in qualifying.

Stressing that he still has more work to do to tune up his Falcon, Winterbottom was to-the-point when asked for his thoughts on the Volvo.

“It was always going to be quick,” he said.

“It’s got good aero numbers a good engine and a good driver… it’s a good package.

Next Story Scott Pye 'right at home' with DJR