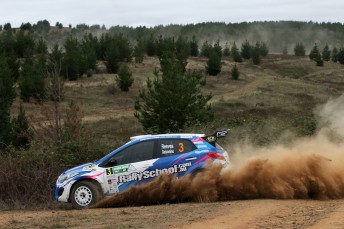 Brendan Reeves opened his 2014 Australian Rally Championship assault in the best possible way by topping the Armor All Power Stage at the National Capital Rally in Canberra.

The 24-year-old Mazda 2 driver was forced to work hard for his Power Stage victory as he pipped reigning champion Eli Evans by just a tenth of a second.

Scott Pedder was third fastest just seven tenths of a second adrift of Reeves in his Renault Clio.

The Citroen DS3 duo of Tony Sullens and Adrian Coppin were fourth and fifth respectively.

The Peugeot 207 of Waylon Sims completed the top six.

“I’m so happy with that, I think Canberra seems to be my new home rally. I’m really excited

“That felt great! I was about four seconds faster than my qualifying run earlier today, which is great considering the car had just sat cold for an hour, so it was a bit scary jumping on the brakes into the first corner,” Reeves said.

“The stage was great fun, very fast in spots, and I was really able to push the Mazda2 to its limits.”

Having proven a dominant force on the Power Stages last year, Evans, who is competing in a borrowed Volkswagen Polo this weekend, was relatively happy with his performance in a new car.

“Despite our time I think that’s a really positive start for us. It’s all a big unknown for us this weekend, but we improved our time by 2.5s from qualifying, and we’re right up with Brendan, who has been in his car for 12 months,” said Evans.

“We’ll at least come away from the Power Stage with at least one Championship point, and considering how tight it’s going to be this year every point counts.”

VIDEO: Wrap from the Power Stage