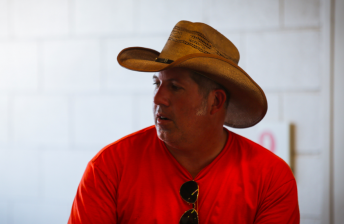 Paul Morris has vowed to leave his ‘Dirty Dangerous Dude’ persona at the garage door when he joins Ford Performance Racing for this year’s Pirtek Enduro Cup.

The 46-year-old starts his FPR duties at the Clipsal 500 Adelaide today, assisting Chaz Mostert in the lead-up to his endurance co-drive with the youngster.

News of Morris’ signing to FPR created a firestorm of social media activity this week, with the Queenslander’s ‘bad boy’ reputation having long polarised fans.

CLICK HERE for details on how you can join in today’s live web chat with Morris on Speedcafe.com

Morris has embraced the ‘black hat’ persona in the past, famously responding to a magazine poll labelling him the category’s most ‘dangerous’ driver by sporting a ‘Dirty Dangerous Dude’ t-shirt during the 2007 season.

“It’s completely different,” he told Speedcafe.com of the attitude that he’ll take to FPR.

“When it’s my car and I’m paying the bills, I’m totally responsible.

“If I want to give someone a bloody nose and I’m paying the bills that’s up to me.

“This is a completely different situation. You drive as you’re told, do what you’re told and contribute as much as you can. The two things aren’t parallel.”

Morris, whose career has spanned an inordinate number of racing categories, refuted any suggestions that he looks for trouble in the Dunlop Series.

“I’ve only ever returned serve,” he said, having been a top-five runner in both Thursday Dunlop Series sessions driving his Sargent Security Falcon.

“If you look at anyone I’ve had off, it’s always been pay-back and I’ve always told them that it’s coming.

“The difference with me is that I’m willing to talk about it and no one else would.”

The veteran expects to play a similar role at FPR to what he did at Lucas Dumbrell Motorsport last year, where he assisted first-year driver Scott Pye.

“I’m just trying to help Chaz and the guys there switch on and think about how they go racing,” he said.

“If I see something that’s coming up that they’re going to trip over then I’ll let them know.

“It’s an extension of what I do every day at the Driving Centre and with Scotty (Pye) last year.

“He should be fast,” he added of Mostert, who this time last year was still competing in the Dunlop Series.

“He should be up there battling for race wins based on his outright speed, but it’s a different environment and there’ll be more pressure on him. Hopefully I can help him through that.”

By contrast to the ‘Dangerous Dude’ tag, Morris has long been passionate about helping educate and nurture the next generation of racing talent.

While the ride and drive experience side of the program is squarely aimed at fans, Morris says there’ll soon be a more serious element for up-and-coming drivers.

Adding to its currently capacities, which includes the ability to conduct CAMS license testing, the Driving Centre will soon be the home of V8 Supercars’ two Ford and Holden Car of the Future prototypes.

“We want to develop a course where drivers can come and experience the real thing,” he said of the prototype V8 Supercars being based at Norwell alongside the existing fleet of modified-production V8 ‘experience’ cars.

“Kids that are coming out of karts and Formula Fords that want a taste of V8 Supercars and really want to learn how to drive them can come and run with us.

“We can do a full evaluation of where they’re at and then refer them on to teams.

“With all of that combined we can do a lot for the sport to keep young guys coming through.”