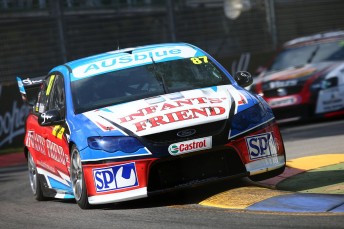 Ash Walsh set the pace in both Dunlop Series sessions

Ashley Walsh edged out Cameron Waters to end up fastest in the second and final practice session for the Dunlop Series at the Clipsal 500.

The two Ford drivers traded the top spot in the dying moments of the 30 minute session.

Paul Dumbrell spent a fleeting moment at the top of the sheets during the session before ending up third.

Ryan Simpson was fourth in what is currently a one-off deal at MW Motorsport, while Paul Morris, Ant Pedersen, Andrew Jones, Taz Douglas, Andre Heimgartner and Geoff Emery rounded out the top 10.

Like Practice 1, the second session ran without a red flag stoppage.

Michael Hector found trouble in the closing stages, however, tagging the Turn 5 tyre wall with his MSR Falcon.

The Dunlop Series will return to the track for its two-part qualifying session from 1100 local time tomorrow.

Next Story Morris to park 'Dangerous Dude' tag for FPR