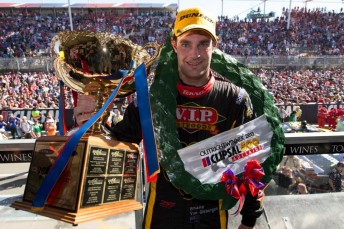 Shane van Gisbergen must continue to block out ongoing legal proceedings over his switch to Tekno Autosports as he prepares to defend his Clipsal 500 trophy this weekend.

The 2013 Clipsal weekend had begun with reports that immediate legal action from his former Stone Brothers turned Erebus team could prevent him from racing at all.

Although no such dramatic steps were taken, Unconscionable Conduct proceedings were formally instigated in the Federal Court by Erebus mid-year.

The court continues to gather evidence from the concerned parties while Van Gisbergen concentrates on his busy racing schedule.

“It is similar to last year… it is in the background. It’s not at the front of my mind,” Van Gisbergen told Speedcafe.com of the ongoing proceedings.

“I’ve been racing every week and it is something I don’t really think about but it’s still there.

“It’s not going to stop me racing and that’s the main thing.”

Van Gisbergen is under no illusions as to the difficulty of defending his Clipsal crown this weekend, although the 25-year-old has reason to be optimistic.

The Tekno Holden proved one of the fastest on each of the championship’s street circuits last year, ending the season with a second victory at Sydney Olympic Park.

“It was a dream start in Adelaide last year compared to the off-season, but a lot has changed in 12 months,” Van Gisbergen said.

“Everyone has developed the cars so it will be fairly competitive this weekend as far as I can see, but our car is good on street circuits so we should be ok.”

The biggest changes for Tekno this year are the recruitment of former Walkinshaw managing director Steve Hallam as team manager and the move back to a single-car structure.

The consequences of the later, says Van Gisbergen, are yet to be fully understood.

“We are down to one car and I’m not sure how its going to work yet,” said Van Gisbergen.

“Not having someone directly to work with and go our own way sometimes might hurt us but we don’t know for sure yet.

“(But) We still get data and set up from up the road (Triple Eight). That relationship has advanced as well.

“There is a lot more information going both ways so in that sense it definitely helps us going down to one car.”

Support category action begins at the Clipsal 500 today, with first practice for the V8 Supercars Championship scheduled for Friday morning.