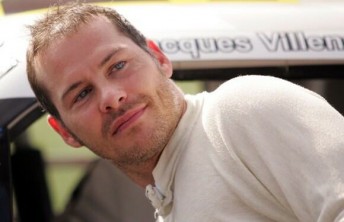 Jacques Villeneuve will return to the Indianapolis 500 this year after a 19-year absence from Indycar’s most iconic event.

The 42-year-old has agreed a deal to drive a one-off third entry from Schmidt Peterson Mototrsports in what will be his first Indy 500 appearance since he won the race in 1995 for Forsythe Green Racing.

Talk of a shock return to the event for the 1997 Formula 1 world champion had been brewing for weeks before Villeneuve and Schmidt Peterson Motorsport confirmed the Canadian’s return in a press conference.

The Indy 500 in May will be Villeneuve’s first open wheel race since the 2006 German Grand Prix.

“To have the opportunity to return to Indycar racing and the Indianapolis 500 is something I never thought possible,” Villeneuve said.

“The memories I have there will stay with me for the rest of my life, and I’m excited to create new memories in 2014.

“Trying to get back to those memories, the speed of driving on that track, on the edge with traffic, it’s something that hasn’t been reciprocated in any other form of racing,” he added.

“That was a level of excitement that was crazy. Also, it’s the biggest race event in the world.”

Since his Indy 500 win in 1995, Villeneuve has raced in Formula 1, NASCAR, Sportscars and V8 Supercars.

This year he is due to make his rallycross debut in the new FIA World Rallycross Championship after agreeing a deal with Peugeot team Albatec Racing.