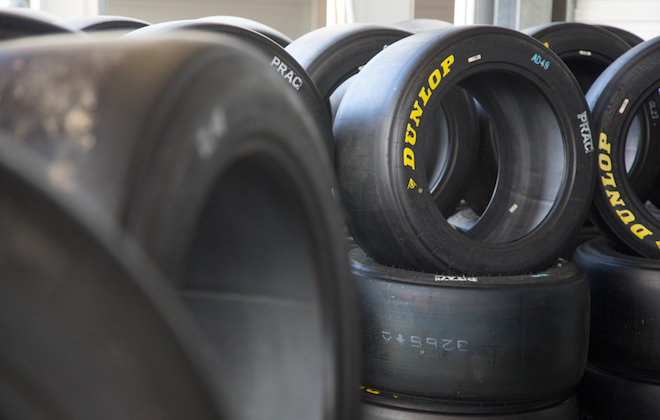 Each car will get 24 Dunlop control tyres for the weekend

The Adelaide Parklands Circuit is one of the easiest on tyres that the V8 Supercars Championship races on during the season.

Dunlop has again brought its hard compound Sport Maxx control tyre to the Clipsal 500, ensuring minimal degradation for the teams to deal with.

The only real danger with tyres here is when they are cool and running low pressures on the out-lap.

Staying off the Turn 1/2/3 kerbs on the way out of the pits can be important to save tyre damage.

Managing the allocation of 24 new tyres across the weekend will also be a challenge for the teams.

This year the tradtional Saturday race has been divided into two 125km races. There is a compulsory stop to change at least two tyres in each.

With only a short splash of fuel needed to be taken on to complete the distance I’d expect teams to only change two tyres.

For the main 250km race on Sunday however I’d predict some more varying strategies.

Although there is a compulsory 140 litre fuel drop, which means at least two stops, those with better economy will have slightly bigger windows to play with.

Qualifying will be very important and those stuck in traffic on Sunday might try and use their fuel windows to get out of the traffic and jump some positions.

As usual the season-opener will answer plenty of questions that have developed over the off-season. It’ll be fascinating viewing.