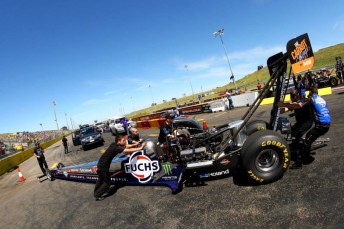 Phil Lamattina is the man to beat in Perth this weekend

This weekend’s Westernationals at the Perth Motorplex sees Top Fuel join the traditional feature category, Top Doorslammer for the first time ever and a crack field will be chasing last round winner, Phil Lamattina.

The two leading categories in Australian professional drag racing will ensure the Motorplex comes alight with a three round format that guarantees each competitor will be required to make at least two passes over both days, ensuring maximum action for the crowd.

Doorslammer will ditch the antiquated eight car ANDRA elimination format, which earlier this month saw over half of the entered Top Doorslammer cars placed on the trailer after qualifying.

All 20 entered cars will both qualify and race an elimination on both Saturday and Sunday, as will the six Top Fuel machines.

From there, the fastest four heat winners will transfer to the A and B Finals respectively. The winner of the A-Finals will be crowned the Round Champion.

Top Fuel has been bolstered with the entry of defending Australian Champion, Darren Morgan. He returns after missing the opening two rounds at the Motorplex in January. Morgan joins locals Mark Sheehan, Martin Stamatis and Allan Dobson, as well as Damien Harris in the other Rapisarda machine and last round dominator, Phil Lamattina.

Morgan and Crew Chief, Ben Patterson, will have a tough assignment in trying to overcome the might of the Phil Lamattina juggernaut – the Fuchs/Elders machine showing the consistency in January that Aaron Hambridge (Crew Chief) has been looking for for some time.

With conditions expected to be cooler than the 35-degree plus nights that faced teams during the January event, Lamattina is confident of bettering his mid-four second passes come the weekend.

“We have some great data for the Motorplex and we’ll need it with such a strong field,” said Lamattina. “Our crew, lead by Aaron (Hambridge), is continuing to get better and better and I can’t wait to line up in the staging lanes.

“The format is one of the great parts of the event, the crowd can come on either night and see a great show.

“If the conditions are right, we hope to put on an even more spectacular show and better our 4.631 pass at 526.6kph that we recorded during the January event.” 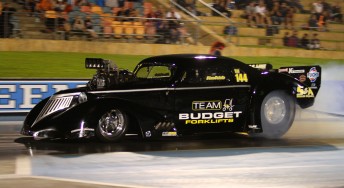 Former sprintcar racer, Pino Priolo is aiming to go one better this weekend

On the Top Doorslammer side, last event winner, Stuart Bishop will be aiming to back up his first ever ANDRA Championship event win, however the Motorplex is renowned for presenting surprise winners.

The lottery of the format – forcing drivers to race through to the finish in each appearance – may suit the likes of John Zappia and Victorian Peter Kapiris, but a number of locals will be keen to upstage the big names in WA drag racing’s biggest event.

Last round runner up, former Sprintcar racer, Pino Priolo is primed to take his 1937 Chevrolet based car to yet another level this weekend.

“I think the time has come that we are going to be competitive. I had my chances to run a five second pass in the finals (at the last event), both times I looked to the side and there was no race car so I short shifted, settled the car and won the race.

“We are looking forward to the Westerns, the crowd are actually going to see 20 cars race both nights not just eight on night two.

“We are not getting ahead of ourselves but the whole team is in good spirits and as long as I have been racing, I never go to a race track thinking that I cannot win.”

The festivities at the Perth Motorplex begin on Friday night with Aeroflow Sportsman Championship qualifying that will include last round Top Alcohol fast man, Shane Weston and event winner John Cannuli in the ‘Competition’ category. Sportsman racing will continue through the weekend, with Top Fuel and Top Doorslammer beginning from 5:30pm on Saturday and Sunday.