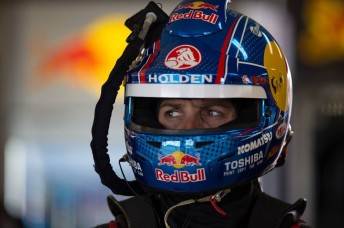 Whincup is now locked into the team until the end of 2015, coinciding with the expiry of team-mate Craig Lowndes’ current deal.

The 31-year-old Whincup stated last week that his preference for a short extension has been influenced by the changing face of V8 Supercars, which has seen three new manufacturers added to the series in the last two years.

“This contract extension will bring up ten years with Triple Eight Race Engineering,” said Whincup in a statement confirming the agreement.

“I’m really happy to be staying with the family.

“There have been some big changes that have happened over my time here – naming rights sponsors, changing to Car of the Future and now changing engineer.”

Whincup stressed in the statement his commitment to the V8 Supercars Championship.

“The category is in really good shape and is moving forward well, so I’m really excited to confirm that I’ll continue to be a part of it for at least another couple of years,” he said.

Previous Story POLL: Who will win the Nissan/AMG/Volvo battle?