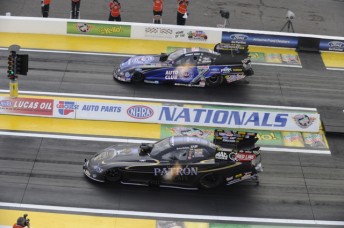 Alexis DeJoria (near lane) was a popular winner

Queenslander Shane Tucker once again snuck into the final qualifying spot for the second round of the 2014 NHRA Mello Yello Pro Stock Championship in Phoenix, however got all tongues wagging when he knocked off first time pole-sitter Chris McGaha in the opening round.

McGaha’s run was quicker than Tucker’s, however the Auzmet Architectural Cobalt got the holeshot and put the Australian family team into round two – the first Australian to have won an NHRA Pro Stock round.

Here they came up against V Gaines, with Gaines outpacing Tucker in his advance to the final once he also disposed of Vincent Nobile.

Allen Johnson took a comfortable win, despite Gaines beating him away from the line.

The news wasn’t so good in Top Fuel for the Australian contenders.

The Australian flags were lowered after just the first round of competition. Adelaide’s Richie Crampton had qualified the GEICO dragster 12th and drew Antron Brown for his round – a tough ask in anyone’s language. Brown was able to easily account for Crampton.

Dave Grubnic was in the next run on track up against the Castrol EDGE dragster of Brittany Force. In a sensational drag race, the pair left the line just 0.02 seconds apart from one another and at the end of the 300 metre strip, the advantage was to Force by a mere 0.005. 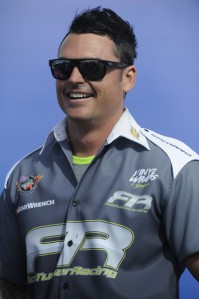 Ironically, the final was a shootout between Brown and Force – who made her first final debut – after they accounted for Shawn Langdon and Doug Kalitta (Brown) and Tony Schumacher and Steve Torrence (Force).

Force ran Brown right to the finish, a superior reaction time from the Matco Tools racer saw him beat Force by just over three one hundredths of a second.

“We’ve had bad mishaps and tragedy here and some wins here. This place really holds a special place in my heart for what we’ve been through and what we’ve accomplished here,” said an emotional Brown when collecting his Wally.

Whilst much of the attention of the female racing world was on Danica Patrick in Daytona, few were keeping an eye on Alexis DeJoria.

The heiress to Tequila Patron, DeJoria has made final rounds before but never taken victory. Until now.

She got through Jeff Arend and Del Worsham in the early rounds before claiming the scalp of John Force in the Castrol GTX Mustang in the semi-finals.

DeJoria would have to defeat another Force car in the finals, with Robert Hight making his way into the decider. He’d beaten Cruz Pedregon, Jack Beckman and Tommy Johnson Jr in his path to the final.

DeJoria set her quickest pass of the day in beating out Hight, storming down the track in a 4.043 second pass against Hight’s troubled 5.4 second run.

“When we won the finals, I couldn’t believe it,” said DeJoria – who became the 14th woman to win an NHRA Premier Series event.  “Actually, I can because I know we can do it, but it’s such a shock at the same time. It’s surreal. It’s really amazing. I don’t think I’m going to be able to sleep.”

Through gaining additional points for Low ET and top speed, John Force maintains the Championship lead. In Top Fuel, Doug Kalitta is the man they are chasing, whilst finalist Gaines holds the Pro Stock points lead by a slender 11 points.

The next round will be the Gatornationals in Gainesville, March 13-16.