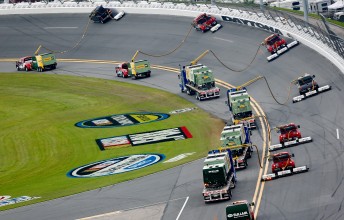 The Air Titan track dryers out at Daytona

Rain and storms have stopped the Daytona 500 at 38 of 200 laps with Kyle Busch out front.

The track lighting system is set to be called into effect with officials aiming to run the race in the evening local time.

The race started under cloudy skies and has so far featured two caution periods for a spin to Kyle Larson and an engine failure for Martin Truex Jr. The second caution on lap 32 preceded the rain with the drivers already behind the pace car when everyone was parked on pit road.

Australia’s Marcos Ambrose was fourth when the yellow flag flew for the Truex Jr engine failure. He came to pit road and changed tyres and is full of fuel when the race gets back underway; he is 22nd. On his first stop he had contact with Danica Patrick after leaving his pit box. The crew checked the front right of his Ford on the second stop.

A NASCAR race is not official until half the race reaches the halfway mark of 100 laps (250 miles) for the Daytona 500. If the race cannot be resumed today, it would be resumed Monday (Tuesday morning Australian time).