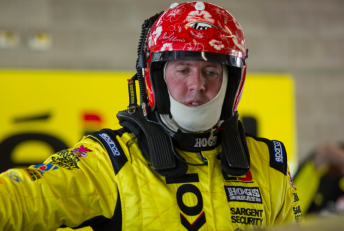 The end of 2013 saw Morris conclude his relationship with LDM as well as sell his remaining Racing Entitlements Contract, which had previously been leased to Tekno Autosports.

It is expected that Morris will also assist FPR to acquire sponsorship and advise the team on race strategy throughout the season.

“When he was racing for Miles (Miles Racing, 2012 Dunlop Series) he used to do things with that car that it shouldn’t have, and when it rained you knew he was going straight to the front. He’s an amazing talent.

“To win a V8 Supercar race in your first year, he’s obviously proven he’s got the speed.

“It’s going to be exciting to have a front-row seat to watch how he goes this year.”

An FPR statement confirming the deal was sent out just minutes after the team was contacted by Speedcafe.com about Morris’ signing.

While refusing to comment on the possibility of Morris co-driving with Mostert, Edwards denied that any commercial or strategic tie-up with Morris is in the works.

Edwards stressed in the statement that Morris’ experience behind the wheel will benefit Mostert.

“There is no doubt Chaz is exceptionally quick but experience and a large bank of knowledge is just as important in the long-distance events and Paul has both in spades so that will help Chaz as he continues to mature as a top-line driver,” Edwards said.

“Paul is one of the unique characters in the sport but his efforts with Scott Pye last season were impressive and with a very short list of competitive and experienced co-drivers at the moment he quickly became our primary target.

“People will think it is an odd pairing but Paul is genuinely motivated by the ability to race for our team and is taking his role very seriously.

“He knows Chazs star is rising and he is keen to help him out so he will be around the team all year providing advice where he thinks its relevant.

“They are definitely a dark horse for the Endurance Cup.”

The recruitment of Morris to FPR follows Steven Richards’ departure to Red Bull Racing Australia at the end of last year.

Steve Owen, who partnered Will Davison in the #6 Ford last year, is expected to switch to the #5 entry alongside Mark Winterbottom.

Dean Canto will return to the #55 Ford with David Reynolds, while Jack Perkins’ co-pilot is currently unclear.

Candidates for the final seat are likely to include Cameron Waters, who is driving for FPR in this year’s Dunlop Series.

Morris will combine his endurance seat with a full-time drive in the Dunlop Series, where he’ll campaign a Triple Eight-built Ford.