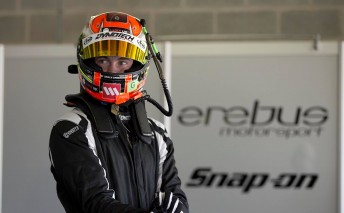 Erebus Motorsport’s Academy program will be represented in the Dunlop Series this season through Jack Le Brocq and Image Racing.

The 21-year-old Le Brocq will line-up in the second of Image’s ex-Stone Brothers Racing Falcons that was bought from Novocastrian Motorsport late last year.

The Falcon will be run by Image and engineered by Erebus’ general manager of motorsport, Barry Ryan, in what is being officially described as a “co-venture” between the two outfits.

The deal is currently for four events while the parties continue to work on sponsorship.

The car will sport major backing from backpacker hostel Wake Up! Sydney Central in Adelaide this weekend.

Le Brocq was engineered to the 2012 Australian Formula Ford Championship by Ryan and has made several outings in Erebus’ SLS GT cars, including a third place finish at this month’s Bathurst 12 Hour.

He has twice stepped behind the wheel of Erebus’ V8 Supercars, completing a full rookie day at Queensland Raceway on February 4.

“Driving in the Dunlop Series this year will be awesome. To get the V8 Supercar experience is massive,” said Le Brocq, who tested with Image last Monday.

“My goal is to eventually move into a main game enduro co-driver role, or full-time drive in the championship, and I will be able to learn so much about the cars this year in the Dunlop Series.”

The Victorian says that being teamed with Image’s existing driver Taz Douglas will be a major boost to his maiden V8 campaign.

“It’s going to be great having Taz as my team-mate,” he said.

“To have someone of his calibre that I can look to learn from will really help me develop.

“We worked together at the Winton test last Monday and Taz has already been so helpful. I really want to absorb as much as I can from him.”