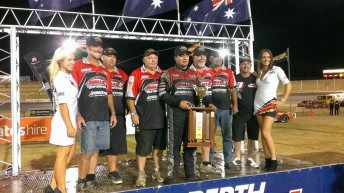 Brooke Tatnell left nothing on the table when it came to wresting the ENZED World Series Sprintcars Title from Steven Lines grasp at the Perth Motorplex, but Lines’ fourth placing behind Tatnell’s win ensured the Series had a maiden Champion.

Lines and the Halls Motorsport team have been superb from the very beginning of the Series on Boxing Night and a mere 68 points was what separated he and eight time Champion, Tatnell. He ended the Series with three victories and five podium finishes.

“Brian Hall and Craig Bennett and everyone associated with this team have given me such a great car to drive night in and night out. This is such a great result for the team, I can’t thank them enough for this opportunity,” said the in-coming Champion.

Early in the Grand Final race, Kenerick Racing driver Kerry Madsen had the American Racing Custom Wheels J&J out in front. As the track began to take rubber, his lowline run proved not to be the place to drive as Tatnell took to the Kwinana high banks. He used the up high momentum to his advantage and swung by Madsen to take the lead.

Lines was a jubilant fourth with Robbie Farr rounding out the top five.

The only red light stoppage of the night came on the first lap when Cameron Gessner came together with Garry Brazier, Brazier rolling the Capalaba Wreckers Schnee.