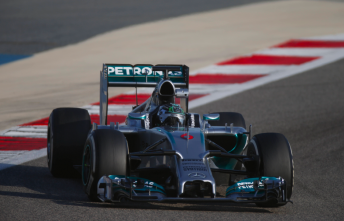 Nico Rosberg ensured that Mercedes remained atop the time sheets on the final day of the second Formula 1 pre-season test in Bahrain.

Taking over from team-mate and Friday fast-man Lewis Hamilton, Rosberg completed 89 laps of the Sakhir venue with a best of 1:33.28s.

That proved a full 1.7s clear of Jenson Button, whose McLaren also mirrored its Friday performance of second fastest.

Kimi Raikkonen was another 1.7s adrift in third. The Finn’s test came to an end with his Ferrari in the Turn 4 barriers.

A day after being confirmed as Williams’ reserve driver, 21-year-old Brazilian Felipe Nasr set the fourth fastest time behind the wheel of the FW36.

The former British Formula 3 Champion is scheduled to attend every race with the team this year, completing practice duties on five occasions.

Fifth for Pastor Maldonado ensured that the new Lotus was the quickest of the Renault-powered cars.

The third and final pre-season test will again be held in Bahrain, kicking off on February 27.