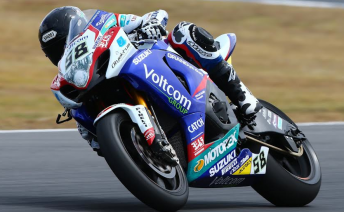 A mid-race charge from Eugene Laverty propelled the Irishman to victory in the opening World Superbike race of the season at Phillip Island.

The Suzuki rider had been stationed in fourth place at the halfway point when he unleashed a charge to the front.

A succession of slick passing moves elevated him to the lead, eventually taking the chequered flag comfortably from Marco Melandri and pole-sitter Sylvain Guintoli.

Australia’s Glenn Allerton narrowly missed out on a top 10 finish as he guided his BMW to 11th and third in the EVO class.

Aprillia’s Guintoli made a strong start from pole and led the field on the opening lap with team-mate Melandri following closely in second and Ducati’s Davide Giugliano in third.

Behind there was drama for British champion Alex Lowes who crashed out on Lap 3. The Suzuki man, who had impressed in free practice, escaped unscathed despite riding with a dislocated ankle.

Meanwhile at the front, Guintoli appear to be in control as he fended off Melandri and Giugliano lap after lap as the race reached the halfway mark.

This allowed Laverty to latch on to the back of the trio and he began to plot his next move.

It didn’t take long for Laverty to slip through into third and in matter of laps he found a way around Melandri and was hot on leader Guintoli’s heels.

With five laps remaining, Laverty pounced with an expertly panned move on Guintoli for the lead. Once in front he began to extend his advantage leaving Guintoli no option but to defend his second spot from Melandri.

In the end, Laverty took the flag to secure Suzuki’s first win since 2010 with Melandri pipping Guintoli to second.